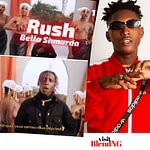 Nigerians have reacted and called for banning the video which contains so many sensitive clips of some ladies been put on naked display.

Here are some of the comments circulating the net

“banning the video would not do much, i think NBC should create a policy whereby before any video or song is released it should attain a level of credibility by their team, even before the public sees or listens to it “

“For me it Should be ban, the basis of singing a song is to teach morality, economic freedom and other important things in human endeavor. And if it should be some sort love song the way at which you portray it should be minimal. This kind of video is not encouraging anything to the younger generations” 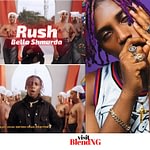 It needs to be banned.if NBC can ban ric hassani’s “thunder fire you” which to me has no black spots,then this should be banned ASAP..these artists are not considerate at all,they just want to shoot videos and make money,not minding their fans which even include some minors. God bless 2face idibia..he can’t do such

It will be recalled that Rush snippet was dropped early this year by Bella which is gaining serious and heavy acceptability from music lovers in Nigeria.

What is your thought about bella rush music video ban ?

Zazoo crooner has been making the headline recently with his shows and performance both in Nigeria and abroad.

Jonzing world record signee Ruger is out with his official music video to his grossly populated song Dior.

Michael Adebayo Olayinka, popularly known as Ruger, is a Nigerian Afrobeat singer and songwriter, the Dior music video was part of his recently released EP project for 2021 which consists of 4 tracks with no single feature.

The said artiste Ruger has consistently dominated his music prowess in a ground style, Dior Music video has been released and is out on Youtube and other DSP in Nigeria, Africa, and the world.

Watch the Ruger Dior Music video and share your view

We have presented to you the official music video of the upcoming world cup that will take place in Qatar in November this year,2022

This music video Hayya Hayya video(better together) has quest artistes like Trinidad Cardano, Davido, and Aisha who contributed a lot in making the song and video