in Entertainment
Reading Time: 4 mins read
A A
0
980
SHARES
1000
VIEWS
Share on FacebookShare on TwitterPin itShare this on WhatsApp

Woju Crooner Kizz Daniel Surprises his fans with a new and fresher look of his outlook with picture that he shared on Instagram.

The Ogun born singer and hit make never gets worry or exhausted though it is being a while the singer release the song, the Ada hit maker is yet to drop any single hits i this year, may be it is time to do so because of his new look.

The song-writer who currently with a whopping followers of over 7.4millions which is so huge. Kizz has done more than enough artistic work in the music industry and has collected various awards .

The Woju maker has featured in numerous songs and tracks with other artistes in Nigeria. 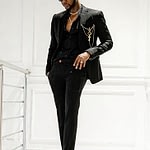 Davido in One Ticket

The list goes all and all with so many single releases back to back with a hit track in all .

You May Like This   E News : You Bit The Finger That Fed You Once ” – Mc Morris Accuses Simi Of Snubbing Him After Fame (See Photos)

Check out the official page of the artiste

Kizz Daniel is a talented singer who has contributed so much to the music entertainment industry in Nigeria and Africa at large.

What is your take on this Kizz Daniel new look

Let us have your opinion about this look

FFK To Presidency : It Will Be Serious Tension If Buhari Try To Kill Sunday Igboho