No one would ever imagine that Lil Frosh career will never see the light of the day after signed to Davido DMW record label but to many people’s surprise signing to a big label is not guaranteed success but Omo Ologo rescue the artiste from fading out .

Welcome to Starbucks On Blendng.com on today article our insight is on fast rising singer Lil Frosh with his music 🎶🎶 career we binge on his recently dropped hit banger OMO OLOGO which has become a popular choice in the street. The comparison is on his achievement while he was in DMW to what OMO OLOGO single track is doing. 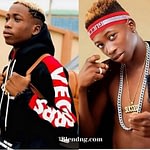 While he was in DMW Lil Frosh was not that trending with any hit songs despite being in big record label ,why this happens ?only God knows but after leaving the DMW with allegation of beating his girl friend the singer drops a single which features Zino Mapariwo crooner then the story changes .

Lil Frosh was even better off when he was unsigned compare to his current status after he was expelled  from the DMW  a record label headed by Davido with over 5-7 artistes  in the team. 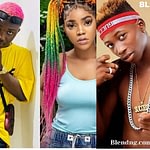 Omo Ologo would not have been a success hit song  with the contribution of his friend Zinoleesky you may check out Zino song here for  download .

With no hit  song under the previous  label and  the issue  beating his Girlfriend that eventually led to his eviction from DMW record label, Lil Frosh had a very rough 2020 but 2021 is going to be blast year for the singer .With this one will boldly say that being under big label is not a determinant for you to blow as an artiste what you need is a solid creative artistic work and pray to God to crown your effort.

The following songs were released while frosh is under Davido Record lable;They are:

in fairness and Sadly to say when combined both songs were no where to go for the singer in term of acceptability and popularity in accordance to street credibility  as compare to “Omo Ologo” within a few days of releasing the song.

“Omo Ologo”which has the collaboration of Zinoleesky without mincing words from our record is a top-notch most listen to in the city across the net and has much downloads than ever before. The song is doing well in term of searches, clicks and downloads as well as digital listing in most entertainment blog website in Nigeria and Africa .

In view of this our correspondent sample some opinion on popular Micro-blogging platform Twitter where a twitter user made an amazing and well sounding comment about the song.

A twitter user with identified name as @Olayinka090 tweeted :

Omo Ologo is bigger than all songs Lil Frosh released under DMW. He should thank Zino for bringing him of the dark..
This life, no be who sign to the bigger label matter 000. Just pray for grace.

Exactly my point… Lil Frosh would have thought he was already ahead of Zino after he was signed to Davido’s label.

He became so arrogant, you can tell easily from his Social media posts but the same Zino is the one helping him today.

Wossss wobi.. Karma can be positive too. Frosh brought Zino to the limelight. Nobody would have believed in Zino’s talent without Frosh’s influence. I love them both

it appears that the tweeted words have generated lot of mix feelings and reactions from many Nigerians as well as music critics they said the statement in no way more than a truth.

In view of this how do you rate or do you think Omo Ologo is a hit song bigger than what he has done while with DMW.

Debo Costa busty Lady who danced seductively at the wedding reception party has come out to share her reasons for doing this.

Debo Dacosta :There is nothing wrong with the outfit I wore ,a video of a well-endowed
lady dancing happily during a wedding ceremony has gone viral on social media, with many people sharing their thoughts on it.
Some commenters praised this lovely young lady and praised her for wearing a simple but elegant outfit to the wedding.
However, Debo Dacosta was recently interviewed by Kemi Olunloyo, a Nigerian investigative journalist.

Debo mentioned during the interview that the wedding she attended was for one of her family members, and that if it had been for anyone else, she would have dressed the same way. Debo Dacosta went on to state that she is fearless and doesn’t play games.

Debo Dacosta said that people refer to her by various names because she is naturally endowed, and that if a celebrity wore the same outfit, no one would complain. She also said that certain celebrities dress in much worse attire, and that the public praises them for it.

Debo Dacosta said, “There is nothing wrong with the outfit.”

The Asmat tribe is the most well-known cannibalistic tribe in the world, and the mere mention of their name used to scare people.

Carl Hoffman accused this ancient tribe of murdering and consuming Michael C. Rockefeller in 1961 in his exposé novel Savage Harvest.

On the south side of New Guinea’s western coast, the Asmat are a tribe who live on small islands surrounded by mangrove vegetation near the shore. They are Papua’s most well-known cannibalistic tribe.

This coastal population lives in a low-lying swampy area in southwestern Irian Jaya that covers about 9,652 square miles (25,000 square kilometers).

Asmat  languages belong to the Papuan language family known as Asmat-Kamoro, which has over 50,000 speakers.

The Asmat tribe believes that they were made from wood. As a result, they regard wood as sacred. They carved beautiful things out of wood and in ancient times. Asmat are regarded as the best stone-age woodcarvers, and many of their carved carvings can be found in museums around the world.

They are well-known for the high quality of their wood sculptures, but they are also known for their traditional headhunting and cannibalism practices. Asmat didn’t only search for skulls; they revered them. To discourage evil spirits from entering or exiting the body, the brains of the deceased were removed and the eyes and nasal passages were closed. Skulls that had been changed and painted in this way were placed in a prominent position in the Asmat’s long homes.

Instead of using  pillow, they would place human skulls under their heads. They ate their animals’ brains, combined with sago worms, straight from their halved skulls.

The Asmat were not only headhunters, but they also “hunted for names.” They claimed that by killing and eating a man, they could absorb his power and become him.

Every person was given a name in honor of a deceased relative or an enemy who had been killed.

After a village set out to kill a man from an enemy village nearby, a child was often given a name just ten years after its birth.

They needed to find out the name of the man they killed and then transport his body to their village. An individual could only get a name in this way.

Fortunately, Asmat’s nefarious image has faded. The missionaries have worked tirelessly to change this. The core Asmat’s spoken language has now been written down.