The Nigerian Instagram sensation model Roman Goddess put away the critics and display her gifted watermelon boob to her close to millions followers on Instagram.

The married woman trolled the critics who said she should stop exposing her cleavages online. 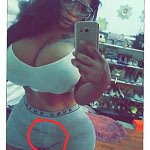 The indecent dressing of Roman has been criticized  by many Nigerian for her lifestyle and wanted the roman to adjust because she is now a married woman but while addressing the critic the sensational woman goes wild saying it is none of his business to address him . Is the man wrong? Actually to some it may be wrong while others see it as a normal thing by exposing her boobs insensitively to millions of people across the globe. 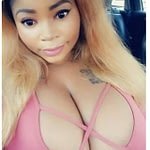 Roam went ahead to shot the troll that who he is to criticse her because her man loves it like strawberry milckshake ♥♥♥♥. 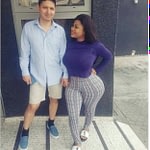 In her replied which she posted on her official IG page illustrated what she really meant. 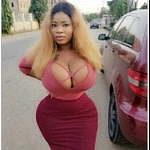 The Goddes who flooded her giving gifted orange to over 455k followers on her social media has no worry about her action and never sends any troll or critics about her lifestyle. 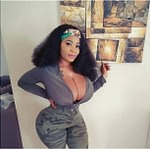 Stop telling me to cover up..hubby likes it like strawberry milkshakes… so who the hell are you to tell me what to do? …”

What is your take on this controversial dressing  by the model Goddess?

let us have your opinion about this dressing

Related Topics:DressFashionlifestyleroman goddess
Up Next

Portable Omololami who was accused of stealing an Iphone and Keke Napep is no doubt a way to bring down the artiste’s glory.

Omololami Portable is a Nigerian street local and indigenous rapper who has been laboured for 10 years in the music industry before his glory shines.

What is view on Portable Stealing Iphone and Keke Napep

A video of a man who caught his wife with their pastor on their matrimonial home has circulated everywhere online.

Man Catches Wife With Pastor On Their Matrimonial Bedroom, the man who cannot hide his pains has taken the video of the alleged pastor sleeping with his wife. The man caught the two of them redhanded with a pastor. In the viral video, released on social media space the mad had asked his wife what prompted her to do such a crazy thing with their pastor.

Naijablog captured the video and shared it where the alleged pastor.

Read This Drinking Alcohol, Womanizing Or Stealing, It Doesn’t Make You A Fake Pastor,Pastor says

The man lamented how hard he was to make ends for his wife.

Watch The Video Below :

Man catches Prophet sleeping with his wife on their matrimonial bed.

Narrating how he caught them in the act, the man said his wife had told him she was going for a vigil.

However after he came back home the next day, and caught her having sex with the Prophet. pic.twitter.com/nkMZml1I6J

However, some Twitter users have down against such ugly action from a woman